Dagger Records Set to Release No Business: The PPX Sessions Volume 2 on October 23

Dagger Records will release No Business: The PPX Sessions Volume 2 by Curtis Knight & The Squires on CD October 23. The album is a follow-up to Experience Hendrix/Legacy Recordings’ 2015 collection You Can’t Use My Name.  The forthcoming release includes October 1965 demo recordings made by the then-unknown Jimi Hendrix, as well as 1967 studio recordings with Hendrix when he was in the midst of his meteoric ascent to stardom. Dagger was founded by Experience Hendrix L.L.C. over two decades ago as an official ‘bootleg’ label to provide Hendrix fans throughout the world with additional live performances, home demos and studio recordings. 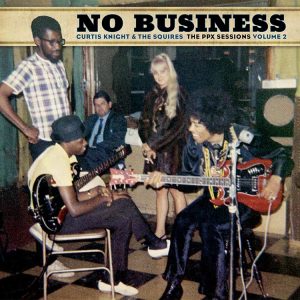 After the conclusion of this initial demo session, Hendrix was approached by Chalpin to sign what the guitarist thought was a release for his participation.  What Chalpin actually had Hendrix unknowingly sign was a contract with his own PPX Enterprises Inc. for $1 and a 1% royalty rate.  Hendrix had previously signed an agreement with the Harlem based Sue Records [home to such acts as Ike & Tina Turner) in July 1965 and was unaware that this too was a recording agreement and not a release for a session fee.  Chalpin filed away the agreement and Hendrix continued to lend his guitar to sessions on Knight’s behalf in 1965 and the first half of 1966.   ,

Curtis Knight & The Squires No Business: The PPX Sessions Volume 2

Founded by James ‘Al’ Hendrix, Jimi’s father, in 1995, Experience Hendrix, has been managed since its inception by the family members handpicked by Al during his tenure as Chairman. It is the official family company charged with managing the music, name, image and likeness of Jimi Hendrix. As a part of their daily operations, Experience Hendrix and Authentic Hendrix oversee Jimi’s timeless legacy on a worldwide basis.