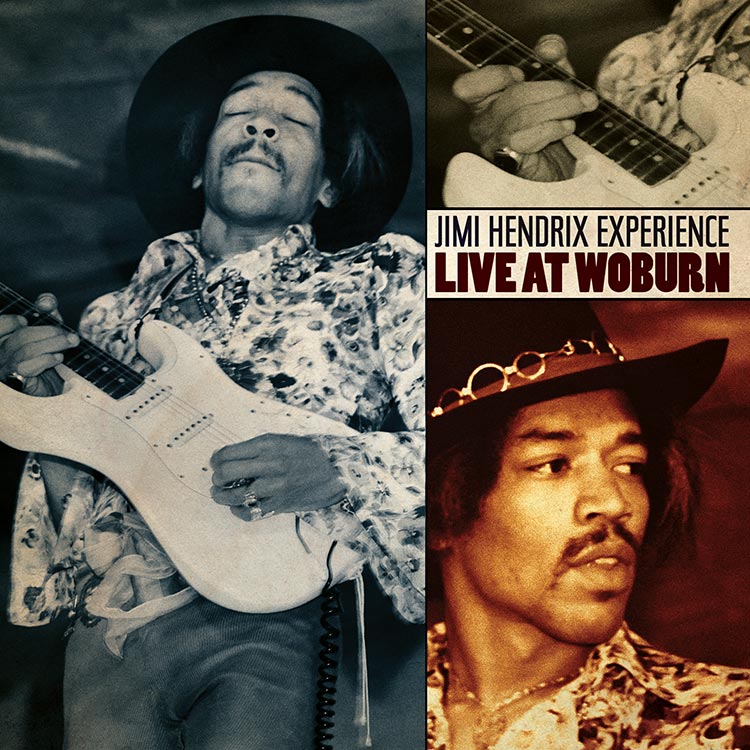 The Woburn Music Festival was one of Britain’s first large scale, open-air rock music events. Staged by brothers Richard “Rik” and John Gunnell, who were well respected individuals in the burgeoning London music scene where they were heavily involved in many aspects including band managed, show promoters and club owners. Rik in particular, who owned three fashionable 1960’s London nightspots—the Ram Jam Club, Flamingo, and Bag O’ Nails—presented authentic, first generation American icons like John Lee Hooker and Otis Redding and some of the brightest examples of a swelling wave of emerging British talent such as The Rolling Stones, Jack Bruce and Georgie Fame.

Jimi’s co-managers Chas Chandler and Michael Jeffery—a fellow nightclub entrepreneur—enjoyed a friendship with Gunnell. Gunnell had been an early supporter of The Animals, and extended the same courtesy to Hendrix and The Experience, presenting some of the group’s earliest London engagements.

Jimi’s popularity had grown exponentially since those early days in 1966 and he arrived at the Woburn Festival as its eagerly anticipated headline act. This anticipation was fueled in part by Jimi’s absence from Britain. The Experience had spent much of 1968 touring and recording in America and had not performed live in Britain since December 1967.

Woburn Music Festival featured separate afternoon and evening sets for both Saturday and Sunday. While rhythm & blues was the primary focus with Gunnell drawing heavily from his own talent pool, casting John Mayall’s Bluesbreakers, Alexis Korner, and Geno Washington together with the more folk influenced Pentangle, Roy Harper, and Tim Rose. The Jimi Hendrix Experience were scheduled to close the Saturday evening show where an enthusiastic crowd some 14,000 strong turned out for the performance.

Axis: Bold As Love was still a top selling album in July 1968 but Jimi had long since moved on to new challenges. To Hendrix, performances such as Woburn were unique, shared experiences and not simply personal appearances intended to help shift units of albums or singles. At Woburn, Jimi skipped songs from Axis: Bold As Love altogether, electing instead to ‘jam’ as he called it—kicking off his set with a spirited “Sgt. Pepper’s Lonely Hearts Club Band” regrettably missed in part by the late start of the recording machine].

The trio followed “Sgt. Pepper” with “Fire,” and despite beset with buzzing, crackles and otherwise unwanted noises throughout their set, The Experience continued to persevere doing their best to surmount the technical problems that hampered an otherwise animated set.

Jimi may have bypassed Axis: Bold As Love, but he did foreshadow his next album at Woburn, stretching out a marvelous “Tax Free,” a contender for Electric Ladyland and a favorite Experience vehicle for improvisation. Hendrix followed up with an extended improvisational rendition of “Red House” before diving into “Foxey Lady.” He also offered his Woburn audience what he called, ‘…a song that we recorded for our new LP. It’s nothing but a hard rock—it’s called “Voodoo Child (Slight Return)”.

Equipment problems were always an irritant for Jimi and Woburn was no exception. He prefaced “Purple Haze,” the group’s final song, with an apology. “We’re very sorry that we have to play through broken amplifiers,” he explained. “Like I said before, it’s really a hang up. It’s very hard to get our own sound across so we would like to end it and say thank you very much for showing up. We would like to do this last song “Purple Haze.” Jimi kicked off a boisterous feedback opening, buttressed by Mitchell and Redding and complete with tremolo bar swoops, wah-wah pedal shadings and soaring dive bomb styled bursts that transitioned seamlessly into the song’s unmistakable opening notes. At its conclusion, the audience roared with approval. While no microphones were positioned to fully capture the intensity of their reaction, their enthusiasm and calls for more can be easily heard through Jimi and Noel’s stage microphones.

The Experience’s performance at Woburn Music Festival would mark the trio’s last performance in England until the two celebrated concerts in February 1969 at the Royal Albert Hall.

Like many of the live releases issued as part of the Dagger Records series, The Jimi Hendrix Experience: Live At Woburn was not professionally recorded using multi-track technology. It was instead drawn from a recording made from the stage soundboard.

As a result, the recording is not without its share of flaws and technical limitations. The recording is raw and occasionally overdriven but it effectively presents all of the voices and instruments onstage. In addition to the aforementioned late start on “Sgt. Pepper’s Lonely Hearts Club Band,” the ending of “Tax Free” was lost when the tape ran out. Fortunately, the tape spool was rethreaded and recording resumed for the start of “Red House”. It is entirely possible that another song was performed and not recorded but there is no firm evidence to definitively confirm this either way.

As noted, the buzzing, crackling and static not otherwise emanating from Jimi and Noel’s battered amplifiers are part of this historical document. Its flaws notwithstanding, this recording represents the only known documentation of this significant performance. The Jimi Hendrix Experience: Live At Woburn, despite its technical imperfections, supplies yet
another fascinating piece to the Hendrix puzzle. Enjoy!