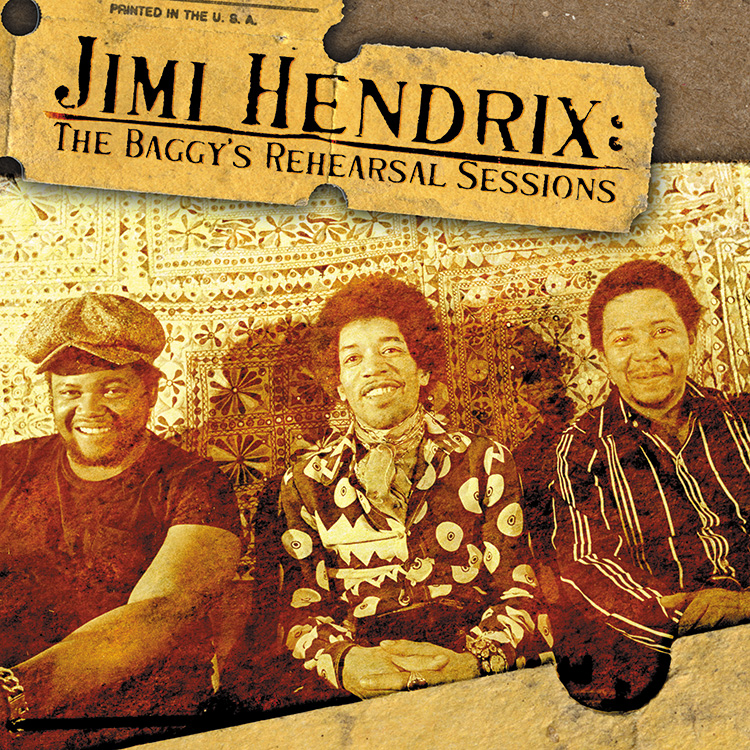 Jimi Hendrix: The Baggy’s Rehearsal Sessions represents the fifth release by Dagger Records, the official bootleg label created by Experience Hendrix.  This edition offers the fruits of the guitarist’s spirited rehearsals fronting the Band Of Gypsys as they prepared for their four unforgettable Fillmore East concerts.

These unpolished, direct to two-track recordings were made over the course of two long December 1969 evenings.  Hendrix had just returned from Toronto, Canada where he had been acquitted in a jury trial for narcotic possession.  The verdict had lifted an enormous burden from the guitarist’s shoulders.  With the court case and all of its possible ramifications now behind him, Hendrix redirected his energy toward preparations for the recording of a live album at the Fillmore East with bassist Billy Cox and drummer Buddy Miles.  “We rehearsed at a place called Baggy’s in New York,” explains Cox.  “It was located down by Chinatown.  We were there prior to Christmas and then a little after, practicing and rehearsing.  We were working up a set with the songs we were going to perform for the [Fillmore East] concert.  Then we realized that we had to do four shows and we used quite a few of those numbers in each of the shows.”

Baggy’s Studios was a nondescript Manhattan rehearsal facility opened by former Soft Machine road manager Tom Edmonston.   Baggy’s was by no means a recording studio designed to compete with the likes of the Record Plant.  Baggy’s had no control room; its purpose was to provide a space for artists to rehearse without restriction and at full volume for as much time as they required.   This was a simple, yet effective rehearsal facility geared to those such as Hendrix who had no other convenient space to prepare for a live event or concert tour.  “Baggy’s had two floors,” remembers Cox.  “It was essentially warehouse space.  We worked in the large room downstairs.  It was a pretty simple set up.    There were rugs on the floor and the walls were padded and soundproofed. ”  While commonplace now, the concept of a dedicated rehearsal room for rock acts [as opposed to vacant halls or theaters] had only begun to take hold in 1969.   Cox explains.  “The recording studio was exclusively used for creating and coming up with something new and different.  This was something else.  Previous to that time, whenever Jimi wanted to rehearse something he would call me up and I would come over to his apartment and we would play through some small amps.  Rehearsal space did not exist as we know it today.”  Perhaps most importantly, Baggy’s rental rates were a fraction of the cost of similar time at the Record Plant.  With Hendrix’s finances hamstrung by the construction cost overruns of his own Electric Lady Studios and the continuing PPX litigation, this was an important consideration.

The twelve recordings that make up this collection were originally made at 7″ i.p.s. on a two-track reel to reel tape machine.  “It seemed like Jimi and I always had a recorder running there,” recalls Cox.  “It was like every move we were making there was being taped by somebody!”  For Hendrix, these recordings served as a convenient tool to measure the group’s progress throughout the rehearsals.  Gene McFadden, a member of Hendrix’s road crew, organized the group’s equipment and installed a sound system from which a feed was patched into the tape recorder.  Hendrix loaded a full spool of tape and essentially left the machine to run.  Each song was recorded live with no overdubs or other such attempts to finish or even polish them.

By all accounts, Baggy’s served its purpose well.   Over the course of several marathon sessions at the facility, the Band Of Gypsys made marked progress rounding such budding prospects as “Earth Blues”, “Power Of Soul”, and “Message To Love” into form.  “Jimi enjoyed his time there,” remembers Edmonston.   “He called me the midnight social worker.   He and Billy Cox were great guys all around.”

Throughout The Baggy’s Rehearsals Sessions, Hendrix can be heard tinkering with both arrangements and lyrics, enthusiastically refining these bright examples of his new musical direction.  What these raw, unmixed tapes make clear is the enthusiasm the trio shared for this new music and the opportunity before them to bring it to life onstage.  Even at their peak of unity, the original Jimi Hendrix Experience never rehearsed in such a fashion.  This is by no means a knock on either Mitch Mitchell or Noel Redding, whose extraordinary interaction with Hendrix took form in a different fashion; instead it speaks to the shared cultural and musical heritage Hendrix, Cox, and Miles shared.  “Our music was spread [across] a wide spectrum,” recalls Buddy Miles.  “You had rockers, you had R&B, soul, and most definitely blues.  For instance, when we played ‘Stop’ by Howard Tate, the original version and the way that it was produced was most definitely uptown rhythm and blues, with a New York sound, but we kind of dissected it, which was cool.  That’s one of the things about the Band of Gypsys that I loved, because we could kind of like make our own baby–blues baby, rock baby, pop baby, and put them all together man, and come up with this formula.  It was like a soulful fragment.”

As groundbreaking as Electric Ladyland had seemed, Jimi’s new material represented another bold step forward by the guitarist.  Jimi had evolved as a guitarist, capable of more sophisticated lead and rhythm patterns.  These new songs were more serious in tone, in keeping with Hendrix’s desire to pare down his songs to deliver maximum impact.   In addition, complex songs such as “Power Of Soul” and “Burning Desire” incorporated intricate time and tempo changes that showcased the lively synergy between Cox and Hendrix.  “Truthfully, Billy Cox was a bear of a thinker, because to play Jimi’s music–and no discredit to Noel Redding or anything like that–but I could understand the fact that he needed somebody to think like he did,” explains Buddy Miles.  “If you really listen to Jimi’s music, there are a lot of time changes and different time signatures in the man’s music.  That was part of what made it so great. I remember when we were into about the third or fourth days of rehearsals, we had already gone through half of the Band of Gypsys songs we were going to play.  From there, it was really about improvisation.  What Jimi really wanted from Billy and I was not just to back him up but be a security blanket.  We also could fuse our ideas, that’s the reason why on little or nothing, Billy and myself came up with certain riffs that were really easy riffs, like for instance “Message To Love”, dah dah dah, du du du du dadda, yeah oooh yeah oooh.  It kind of sounded like the Beatles in a way, but the little curly cues and intricate things were very important.  They were an asset to what we were doing. Jimi was like that too, he gave us music that we could take and pick apart and say ‘Listen to that riff or listen to this riff.  That’s really cool.”

Prior to this release, a few excerpts from Jimi’s rehearsals at Baggy’s have been commercially issued.  “Burning Desire” and “Hoochie Coochie Man” first appeared overseas in 1973 as part of the long since deleted Loose Ends compilation.  In recent years, the Baggy’s recording of Jimi’s yuletide medley of “Little Drummer Boy”, “Silent Night”, and “Auld Lang Syne” has been issued as the popular CD single Merry Christmas And A Happy New Year.   The Baggy’s Rehearsal Sessions also features early versions of many of the songs later to be included as part of Band Of Gypsys or Live At The Fillmore East.

Throughout this collection, Hendrix, Cox, and Miles seem completely at ease and in fine spirits.  Their laughing and joking punctuate a number of the songs, ranging from good-natured imitations of Muddy Waters in “Hoochie Coochie Man” to the humor of popular comedians they enjoyed like Moms Mabley and Pigmeat Markham at the close of “Message To Love”.  Even Hendrix himself is not spared the needle, as Miles and Cox chide their famous bandleader with his own celebrated line from “Third Stone From The Sun”, ‘.and you’ll never hear surf music again,’  at the close of a raucous workout of ‘Ezy Ryder’.

Beyond the good humor, there is much to be relished from a musical standpoint.  Hendrix soars over a superb “Power Of Soul”, weaving his spellbinding rhythm and lead parts around Cox’s rock solid underpinning.  Two versions of “Earth Blues” bear witness to this song’s promise-perhaps even more convincingly than its unfinished studio counterpart now featured at part of First Rays Of The New Rising Sun.    The Baggy’s Studio Rehearsals also reveal that “Changes” and “We Gotta Live Together”, two original compositions by Buddy Miles, were early candidates for the Fillmore East set list.   Miles powers through the upbeat “Changes” in his trademark style, honing the arrangement made famous by Band Of Gypsys.  A fragment of the infectious “We Gotta Live Together” was preserved when an unknown tape operator snapped on the recording device near the song’s close.  “Baggy’s Jam”, like so many other impromptu explorations by the trio, is an unexpected treat, building in intensity as Hendrix incorporates of host of fertile riffs and rhythm patterns.   A second, vigorous rendition of “Burning Desire” brings the disc to a close.

Taken together with Band Of Gypsys and Live At The Fillmore East, The Baggy’s Rehearsal Sessions offers Hendrix fans a more detailed view of the evolution of one of Hendrix most lasting achievements.   Enjoy! 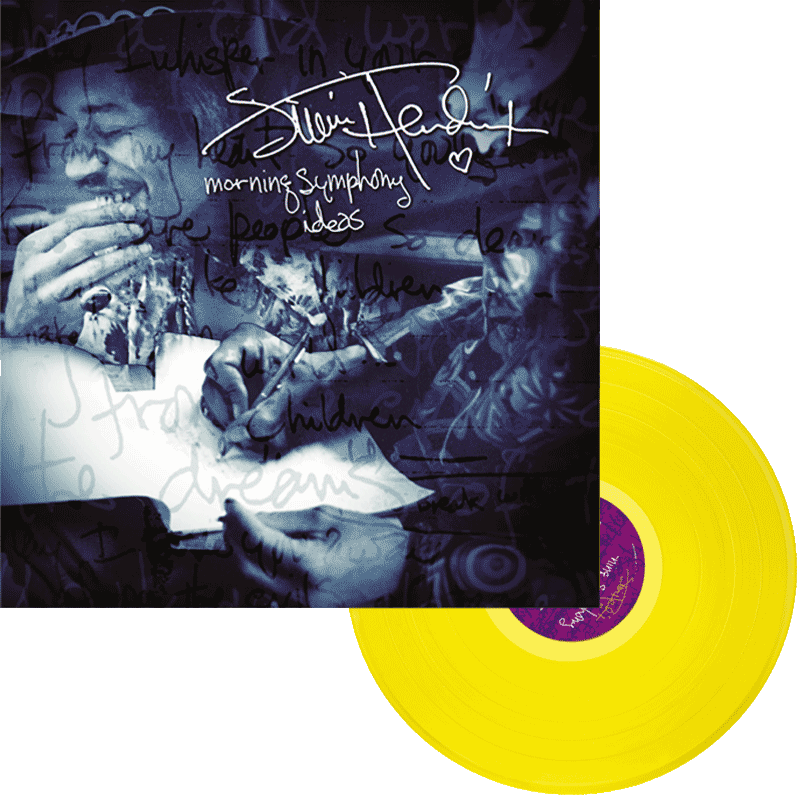 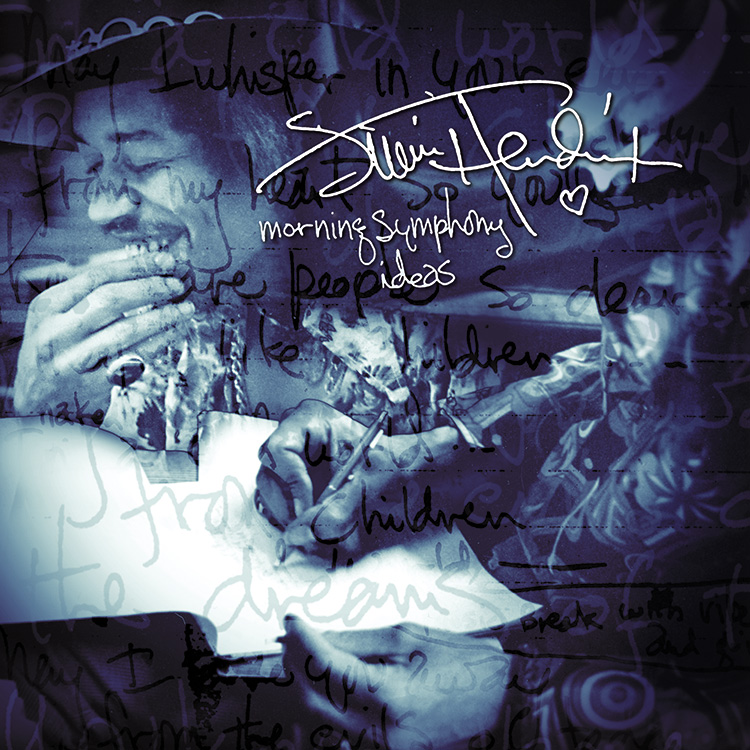